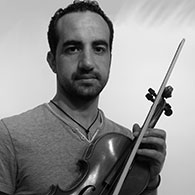 Rami Faisal violinist, was born in 1986 in Swaeda, Syria. At the Conservatory of Music in Damascus he studied violin with Professor Ali Muchtar Babajew and Lecturer Wassim Imam. From 2010-12 he was a member of the Arabic-Syrian Orchestra for Oriental Music. He also performed with the Syrian Symphonic Orchestra.
In 2013 he performed at the Konzerthaus in Berlin with the Arabic Youth Philharmonic Orchestra. Rami has lived in Germany since 2013, and since 2015 he is a member of the Orchestra of Syrian Emigrees in Germany.