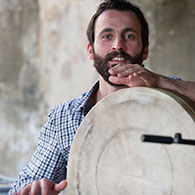 Elias Aboud percussionist, was born in 1988 in Syria. He received a Bachelor's degree in Percussion from the Conservatory of Music in Damascus. He also studied music theory and composition, and his composition "Bus Station" was performed in Dar Al Assad Culture & Arts.
He played with the Syrian National Orchestra under Missak Baghboudarian and is a member of the Syrian Expat Philharmonic Orchestra. He has played with the European Youth Orchestra under Marco Munari.
Currently, Elias lives in Germany, where he continues to study percussion and composition, and performs with many ensembles of chamber music, jazz, folk ensembles and Arabic music.